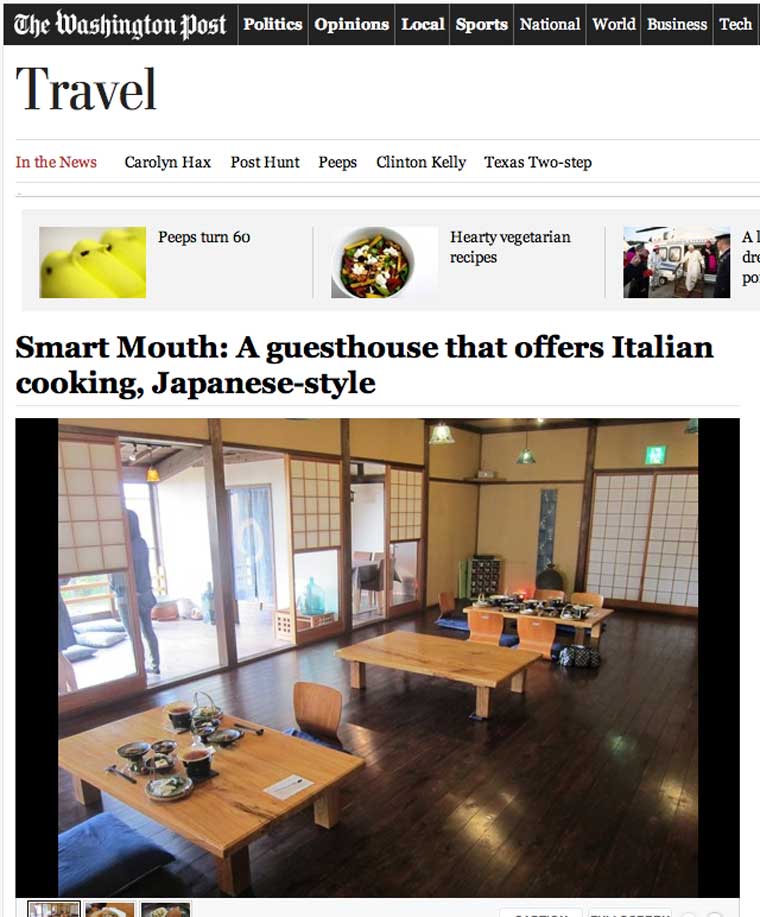 Located near a fishing village on the Sea of Japan, Flatt’s is a guesthouse and restaurant operated by an Australian chef and his local-born wife. It’s a small, traditional place of the kind you see all over Japan: There are four guest rooms with tatami-mat floors, futon bedding and views over the garden and out to the sea, indoor and outdoor bathhouses and a dining room furnished with low tables and cushions.

After meals, the owners spend time chatting with their guests, just as you do with yours. The ingredients are hyper-seasonal, ultra-local and fresher than most you’ll ever see.

But there’s a twist: Ben Flatt’s training is mainly in Italian cooking. And that’s what he’s pursuing, in his own way, on the Noto Peninsula, north of Kanazawa.

Now, when traveling in Japan, my wife and I have always steered clear of Western food (except for pastries). But how could we resist something like this?

For people like us, who speak little Japanese (or none, in my case), arrival at a small rural guesthouse can seem fraught with uncertainty and misunderstandings, although the ending is invariably happy. But here at Flatt’s, those first steps are easy: The owners speak English. Ben Flatt met his wife, Chikako, when she was teaching in Sydney, and he followed her home to Noto, where he has now been for 17 years.

The absence of a language barrier means that you can ask even complicated questions and that you’ll enjoy a fuller experience. We’ve had great fun in places where scant English is spoken, but we’ve missed real interaction with the hosts and with other guests. At Flatt’s, this conversational dimension is restored, and it makes a memorable difference.

For dinner we were offered the option of sitting at a Western-style table. This was sorely tempting, until we saw that it would isolate us from the main action. So we chose Japanese-style seating — with the understanding that we would quickly end up sprawling rather than sitting neatly, buttocks on heels.

We began with a potato soup that said a lot about this restaurant. The potatoes were home-grown; the savoriness came in part from ishiri, a deeply flavorful liquid made from fermented salted squid innards. Most people buy ishiri in bottles; Ben brews his own, and it is remarkable in the way it adds umami, or savoriness, without bringing along the flavor of seafood. This soup tasted not of squid, but of potatoes, enhanced. (This is akin to the way anchovies are used in Mediterranean cooking.) There was good focaccia, from the Flatts’ own nearby bakery/cafe.

For the most part, the remainder of our meal was seafood-based. The fishing boats go out around 3 a.m. and return a few hours later. This is exciting: Seafood comes into the kitchen alive and in prime condition.

The next dish was notably tender whelk in a gentle garlicky emulsion — the first detectable garlic we’d had since arriving in Japan 12 days earlier. Then, another gastropod: sazae (turban shell) with basil dressing, served alongside slices of raw hiramasa (yellowtail amberjack) with a homemade salt/yuzu/chili condiment (yunanba) that had been aged for two years.Pasta followed: herb-scented egg noodles with squid, served atop a black sauce made with fresh squid ink and more ishiri. Again, the ishiri was there to deepen flavors, not replace them; I wouldn’t have recognized its presence without prompting. The dish was lovely. Rather than a potentially murky tangle of black, beautifully pale squid and noodles are set against an inky background. The flavors were elegantly balanced.

A small lettuce and tomato salad also came from the Flatts’ garden. Crackling-crisp fried okoze (stonefish) followed, with yuzu, thyme and local (of course) sea salt. Then a dish of pure umami: a shiitake mushroom-cap “steak” with ishiri and Parmesan. All that savoriness may sound overwhelming, but it wasn’t.

A light dessert and tea from the Flatts’ own tree for my wife (espresso for me) were followed by a relaxing hot bath and a comfortable night’s sleep.

We didn’t know what to expect in the morning: croissants or foraged wild vegetables. The latter came closer to what we found on our breakfast table: many little dishes, entirely Japanese, including tofu and various vegetable preparations along with broth in a big scallop shell over a burner, in which we were invited to poach squid rings and an assortment of vegetables. Rice balls were toasting over a charcoal brazier off the main dining room, as was home-made salt-preserved fish (which I found too intense, even as a condiment).

After breakfast, we wandered around the vegetable garden, then began to think about how we’d get back to Kanazawa. The Flatts consulted transport schedules online (there’s WiFi), and then Ben drove us to a bus stop to catch a convenient service to the city.

Apart from that breakfast, it’s hard to slip Ben’s cooking into either an Italian or a Japanese pigeonhole. He’s doing what good cooks should always do: bringing his own background and skill to bear on local ingredients and approaches, and doing it with an acute palate and polished technique.

Accommodation with dinner and breakfast: $125 to $170 per person, plus 5 percent tax, depending on the choice of menu and not including drinks. Meals only start at $50, lunch and dinner. Reserve by phone.