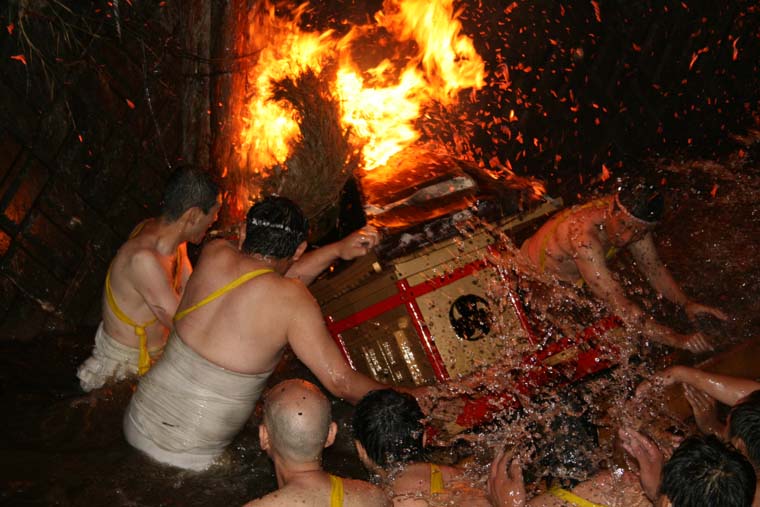 The festival is held on the first Friday through Saturday of July every year (previously on July 7 and 8) as the first Noto Kiriko Festivals, which are held all over Noto, Ishikawa from July to September. Abare Festival is dedicated to Yasaka Shrine in Ushitsu.

On the first night, Friday, of the festivities the Mikoshi and about 40 Kiriko make their way through the streets of Ushitsu (a village inside of Noto Town) and finally gather in front of the city hall to weave around large bonfires resting on the top of large poles. Groups of men (and rarely women) work together to carry the large wooden Kiriko while children sit atop it playing drums and flutes. The men often carry the Kiriko so close to the suspended bonfires that they suffer minor or major burns from the falling sparks. The children usually wear wet towels draped over their heads to protect them from the sparks.

On the second night, Saturday, the Kirikos once again weave their way around town but the main attraction is the wooden Mikoshis that are carried (by about 12 men) down the main street to be blessed. The men carrying the Mikoshi continually thrash it against the ground and grind it into the asphalt of the street, doing their best to break it as much as possible. After passing 3 different checkpoints where they stop to pray, receive blessings, and drink sake; the men will throw the Mikoshi off a small bridge (roughly 7 meters tall) into a small river that runs through the middle of town. The men will then jump into the river and bash the Mikoshi against the bridge’s concrete support beam while splashing one another. Handling the Mikoshi these way means following the divine will, hence such rough handling is actually a manner of prayer.[6] After that they will take the Mikoshi a short way up the road to a second river and throw the Mikoshi off the side of the road into the second river. At this point they will bash the Mikoshi up against a hard bit of the road to attempt to further shatter the top of the Mikoshi. However at the second river a bonfire, which has been lit above them, showers sparks and flaming debris down upon their heads as they attempt to destroy the Mikoshi. The men vigorously splash one another to protect themselves from the fire. Then the men will retrieve the Mikoshi from the river and take it to Yasaka Shrine, a Shinto Shrine . In front of the shrine there is a large bonfire on the ground in which they will repeatedly throw the Mikoshi and then retrieve it afterwords, when they believe that they have properly destroyed the Mikoshi they will take it through the gate of the shrine where the priests will judge if it has been properly destroyed. If the priests decline to take the Mikoshi into the shrine, the men will return to throwing it in and out of the bonfire and smashing it upon the ground before returning it to be inspected by the priests once more. Eventually the priests will accept the Mikoshi into the shrine. This happens twice, the first wooden Mikoshi being destroyed between 10:00 p.m. and 12:00 a.m. and the second between 12:00 a.m. and 2:00 a.m.

Despite the name, the Fire and Violence festival is safe to attend for all ages. The 12 men destroying the Mikoshi are the only ones that are in any danger of physical harm.