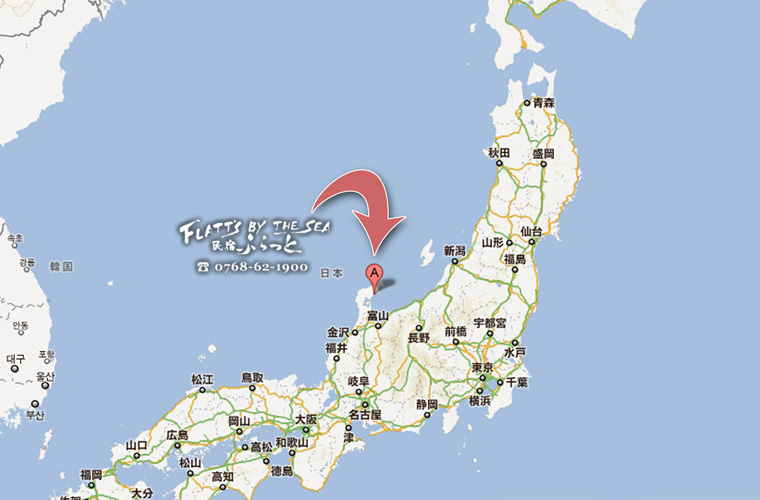 By car from Kanazawa

It takes about two and a half hour from Kanazawa by car to Flatt’s. Take the Noto toll road for about one and a half hours, and get off at the Anamizu Exit. At the first intersection after the exit turn right. At the second intersection turn left.  On the right hand side there will be an Esso petrol station and on the left side a Toyota car dealership. Then it’s a 30 minute drive along Road 249 from Anamizu towards Ushitsu. On the left you will see the Flatt’s sign,  turn left and follow the small sign to the Flatt’s car parking area. The sea will be on your right.

If you happen to miss the Anamizu Exit you will be on the road that goes towards Suzu. That’s ok – you can follow this road for around 20 minutes, then take the Yanagida Exit and turn right towards the town of Ushitsu. When you enter the main town, turn right at the second traffic light and follow Road 249 for four kilometers. On the right hand side you will see the Flatt’s sign.  Turn right and follow the small signs to our car parking area.

By train and bus

It takes more than four hours from Kanazawa JR station to Flatt’s.  From Kanazawa JR station, catch a train to Wakura station then change to the local Noto train line to Anamizu. At Anamizu make sure that you get on a bus bound for Ushitsu. Get off at Yanami Benten bus stop. If you telephone us before leaving Anamizu, we can pick you up at the bus stop.

By express bus from Kanazawa to Noto Airport

It takes approximately two hours and ten mintues from Kanazawa JR station to Noto Airport by Hokutetsu Oku Noto Bus. The bus we recommend to catch. Departure time from Kanazawa JR station is 1:10pm, arriving at Noto Airport at 3:20pm.. From Noto Airport there is  Booking only taxi service call Furusato Taxi  that will leave at 4:00pm bring you from the Noto Airport to Flatt’s.This Taxi service need to be booked by 5:00pm the day before and only available at this time in the afternoon.
Telephone: +81 768 760069 from overseas.   Telephone:  0768 760069 if calling within Japan.

By plane to Noto Airport

ANA operates two flights per day between Tokyo’s Haneda Airport and Noto Airport. Flight duration is one hour, and the regular one-way fare is around 24,000 yen, but discount tickets are usually available for between 14,000 and 18,000 yen when booking in advance on the ANA website.

The Furusato Taxi Service will bring you straight to our doorstep from the airport and charges 900 yen one way per person. Reservations must be made at least one day in advance before 5:00pm for bookings.   Telephone: +81 768 760069 from overseas.   Telephone:  0768 760069 if calling within Japan.

Rental car outlets can be found at the airport if you prefer to have your own vehicle to explore the Noto area.

Things to do around Flatt's